SPECIAL EVENT FOR WALLY AND THE FANTASTIC PREDATORS! Backpack guy is at a loss for words. EVIL BOON has included more speaking parts for him.
Which he considers the worst idea ever. He wants your help to write lines for him to say whenever Wally buys an item. To participate join our discord server and start submitting ideas for what voice lines you think would be a good fit for him to say. 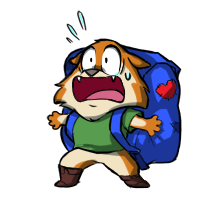 Here is how the event works, whenever you buy something from Backpack guy, he'll say a voice line (like if you buy half an apple he'll say "I SWEAR IT HAD A BITE OUT OF IT WHEN I FOUND IT").

Backpack guy is inspired by the people I met who had anxiety but despite it, they still pushed through in life and never let their anxiety stop them from achieving their goals. So I thought it was ironic to create a salesperson that had crippling anxiety and pushed through regardless.


Once you're ready to start submitting here is the DISCORD.

Added new native mouse resolution option in the pause menu. (this has 0 lag with mouse)
This new option can be re-sized to match your monitor size.

Get Wally and the FANTASTIC PREDATORS

Wally and the FANTASTIC PREDATORS

The fastest rogue-lite ever created.